Please scroll down through the news items below to find out more about Peter Aldington’s buildings.

The ‘Wilkinson House’, Ellers Road, Doncaster was built in 1967-8 to the designs of Peter Aldington and John Craig, for close family friends of the architect. It was designed specifically for the needs of the family.

The house is set behind another pre-existing house at the end of a drive and is entirely hidden from the road. The construction is of untreated concrete blockwork with a flat roof supported on a structure of timber joists and steel beams. The plan is single storey in a U shape with bedrooms round the north and east sides and living and dining areas to the south. At the centre is the kitchen which looks out westwards into a courtyard, now enclosed as a conservatory designed by the architect in the 1990s.

The house was owned by the Wilkinson family until 2014. Follow the pictorial blog by the new owner here:

Peter Aldington has created a stunning new book, detailing the private houses designed by the architect and his practice, from the first house at Askett Green in 1962 until his retirement in 1986, including projects that were never built. The 270 page book contains photographs, plans and section drawings as well as beautiful illustrations and sketches by Aldington’s partner John Craig and an overview by architect John Pardey.

The book costs £49.99. Copies are available to buy at Turn End open days or from the RIBA bookshop:

In January 2015, ‘Ketelfield’, a private house designed by Aldington & Craig in Higham near Colchester was awarded Listing Building Status.

All 9 built houses that Aldington designed, including the small group at Turn End, Haddenham, and Lyde End, Bledlow, are now listed, two at Grade 2*, more than any other living architect in the UK.

In 2013 Turn End featured as one of the country’s key post-war buildings in English Heritage’s exhibition ‘Brutal and Beautiful, Saving the Twentieth Century’ at the Quadriga Gallery, London.

In 2009, The Royal Institute of British Architects, The Twentieth Century Society and English Heritage published ‘Aldington, Craig & Collinge’, which details the work of the architectural practice.

The foreword to the book by Peter Davey, as below, explores the ethos of Peter Aldington’s own house at Turn End and the ideology of the practice.

“I first saw Turn End, the Aldingtons’ house and garden at Haddenham, about 25 years ago and was immediately entranced. Over the years and seasons, the place has seemed ever more wonderful. It unfolds quietly from the unpretentious parking court in a series of spaces where natural and human are intimately entwined. In fact, apparent nature is almost as much artefact as the house itself, for, apart from the magnificent old trees, inherited from the Victorian villa grounds it has replaced, the garden has been almost continuously replanted over the years. It is a series of secret spaces, each carefully composed to take advantage of topography, shading and orientation with plant species chosen to respond to their locations in colour, form and habit. Curiously, it is the house that seems to have changed least. Its clear construction in stained wood and white blockwork evokes the optimism of post-war Danish architecture, as well as the spartan simplicity of Highland cottages.

Yet, though construction scarcely resembles the vernacular of rural Buckinghamshire, the Aldington house, and the other two that make up the group seem ever more deeply rooted in their location. Largely built by Peter and Margaret Aldington themselves, Turn End exemplifies many of the qualities of the work of Aldington, Craig & Collinge. For instance, carefully scaled response to locality and site, simplicity and directness of building, ingenuity of planning are all found in different ways in later buildings. But expression has varied greatly. There could be few greater contrasts than between the Aldington house and the Wedgwood one at Higham St. Mary in the Stour valley, close to the border of Suffolk and Essex. Aldington wanted to get away from the firm’s ‘hairy image’, but the change of expression to an almost Miesian architectural language was caused as much by the clients’ intended way of life as by the architect’s predilictions. They wanted virtually to live in their fine old garden and the extensively glazed, rigorously ordered steel frame structure was the result.

One of the reasons why the firm’s buildings are so different is that clients have varied requirements. When John Craig joined the practice, as well as contributing design and graphic skills, he transformed relationships with clients. He developed a thorough but sympathetic approach that allowed a detailed brief to be produced for each project, so enabling Aldington as chief designer to respond intimately to clients’ intentions and ways of life. The approach proved flexible enough to be applied to building types other than the houses that made up most of the work of the practice. Doctors’ surgeries for instance became another specialisation: the firm was able to transform normally drear and angst-ridden institutions into welcoming and generous places.

For me, one of the most remarkable results of the collaboration between Aldington and Craig was the Anderton house in Devon that brilliantly relates the very different characters of the owners and reconciles them in geometry derived from the lie of the site. This is architectural imagination of the highest order, creatively reconciling requirements that are logically incompatible. It is tragic that so much of the intricately worked creative output of the practice was forestalled by bureaucratic blindness, but we must be grateful for what did survive the hazardous journey from paper to three dimensions. This book is an evocative tribute to an outstanding creative practice, which throughout lived up to the promise of Turn End.”

Discover our events programme for 2018 on our NEW WEBSITE

If you'd like to join our wonderful team of Volunteers and help staff our Events programme and Friends Scheme, please get in touch: turnendtrustevents@gmail.com

Allium bud in No Man’s Garden

The main glade in June 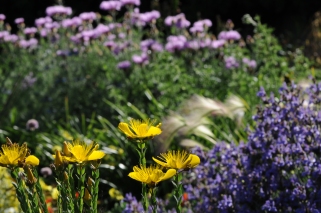 Early summer in No Man’s garden 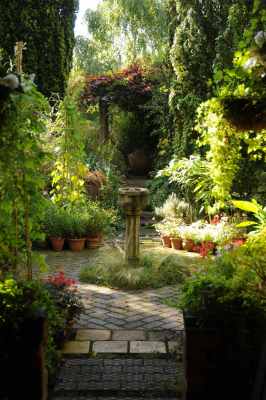 The main glade in April 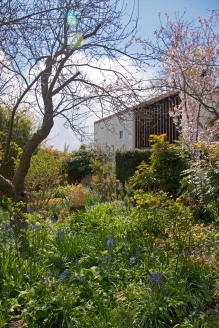 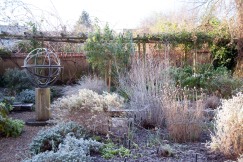 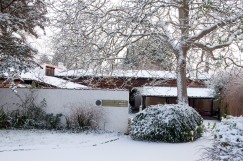 The entrance in snow, February 2015

Sculpture in the Garden 2014, the summer borders

Sculpture in the Garden 2014, lady in No Man’s garden

Sculpture in the Garden 2014, cheetah in the West Borders